Yesterday I got my e-tickets: Las Vegas to London to Riyadh and then Riyadh to Buraydah.  There is a 7 hour layover at Heathrow and then a two day layover in Riyadh.  I am sure there will be paperwork to do at the Company offices in Riyadh. Maybe I will even have a chance to see a little of Riyadh while I am there.

The other big step accomplished: Norah managed, with a little help from me, to trap Spitz, Smokey Joe and OliverOrangeKat and transport them to a feral colony in a sanctuary supported by Heaven Can Wait Animal Society where they will live out their days with other cats either too fierce or too shy to be adopted.  Norah rescued Spitz and SmokeyJoe when they were in to HCWS to be spayed and returned to the trailer park where they had been living.   But both were such pitiful little bags of bones and we had to hand feed both of them for many days – after, of course, Spitz managed to sink her teeth clean through my fingernail.  They were both past the age where they could successfully be tamed but Smokey Joe would come in the mornings to take crunchies from my fingertips and, over the past week or so Spitz would sit back behind the pack and grab the crunchies that I tossed her way. MissWhite also left yesterday, but she is going to live with Krystal, who also has two other small cats adopted from HCWS.  That just leaves me with Charlie – who will go live with my sister and Katy – who is on her way to Norah’s as soon as she gets over her cold.

Coraline still needs a home – she’s bossy with other cats so will do well as an only kitty. This is the one who put Boris-the-Pitbull in check, in no uncertain terms, when he got to enthusiastic about being “friends”! 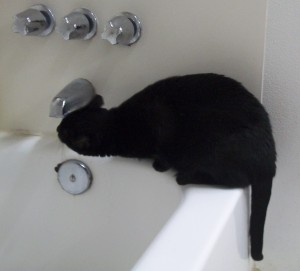 Paul Simon, who was stuck in Canada for a while, finally has his paperwork rearranged and will be coming down on December 6th to spend help me through my last week here. I will be glad to have an extra pair of hands!  He’ll then drive the Subaru up to Salt Lake as Jay will be driving the car while I am gone.

I also got my second Hepatitis A&B shot – don’t need the third one until my birthday, next year. I’ve also had shots for meningitis and typhoid as well as the usual flu+H1N1 and pneumonia.

This entry was posted in Getting ready to go to KSA. Bookmark the permalink.